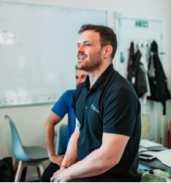 Hi, my name is Mike Grice and I’m the West Midlands Rep for the STA. This is my career journey so far:

My Dad was in the RAF and we were stationed at RAF St Athan in the early 90’s so I started my career in South Wales. Whilst at college I completed a gym instructor and lifeguard course and I worked at Barry Leisure Centre (home of Gavin and Stacey!), a Garden centre in Cowbridge and fish & chip shop in Llantwit Major (to keep me busy!) After completing my college course, I took a year out and worked full time as a fitness instructor at a small hotel near Cowbridge - I had a weeklong induction and then basically ran the whole facility! After my year out working at the hotel, I started a degree in Hospitality and Leisure Management at what is now University College Birmingham. I chose that particular Degree because it was a four-year course and thought that would give me enough time to figure it what I wanted to do! When I arrived in Birmingham, I got a job at the University gym and worked at that gym throughout my studies. I also started work on the weekends at a brand-new health club that had just opened in the city centre - Courtney’s (which then changed to Cannons). I realised whilst doing the degree that I definitely didn’t want to work in hospitality and really enjoyed the work with Courtney’s/Cannons. My Uni course had a work placement year and I switched to working full time at Courtney’s and started to get more involved in the operational and marketing side of running the club. I used the money I earned from my placement year to pay for CPD courses and would attend courses on most weekends to increase my knowledge in health and fitness. I did 1:1 training (before PT qualifications existed) and taught group exercise like BodyPump, BodyCombat, Studio Cycling etc...

I’d finished my degree and got a job with Cannons as part of the pre-sale team at a huge 5000-member health club in Leamington. I completed the 3-month pre-sale in Leamington before becoming the Operations Manager at Cannons (now Nuffield) in Cannock. I worked there for 2 years and soon became involved with the lifeguard and first aid training for the team and qualified as a tutor/assessor so that I could teach lifeguard, First Aid and Defibrillator courses. I also took on the role of regional operations manager for the Midlands and helped train new operations managers coming into the business. In 2003, my son was born, and I needed to move closer to home so I took on a Club Manager role with LA Fitness. LA ran their clubs very differently to Cannons and I was fortunate that LA we’re recruiting for National Trainers to teach in-house courses. I applied and got the job. I worked for 2 years traveling the UK and Ireland teaching and writing courses for LA fitness staff. I must have taught over 1000 lifeguards and first aiders during that period. This was also the time that I started my own training company. I was lucky that the contacts I had made throughout the country whilst teaching for LA also used me to deliver some of their refresher and qualification training too. Again, the traveling as a National Trainer became tough so I moved back into club management and became the Operations Manager of a Livingwell Club in Birmingham. I knew I wanted to continue my teaching, so I completed a 7307 course at night school so that I had an official teaching qualification. The Livingwell club I worked at in Birmingham was right next to one of the city’s biggest colleges and I managed to pick up some part time teaching on the Health and Fitness courses whilst working as an Ops manager at the health club. We created a really good link with the courses and the health club and took a number of students on as work experience and taught some of the lessons from the club too.

Eventually the college hired one of our health club meeting rooms as a permanent classroom and I taught Gym Instructor and PT courses out of my own club. I also hired the room to teach my own courses too. I had a training school with Active IQ and delivered L2,3 & 4 health, fitness and therapy courses. During that time Livingwell were bought out by Bannatyne and my role was made redundant, so I applied for a full-time teaching post and worked at the college for nearly 5 years. The college wanted me to help develop the Foundation Degree in community health and the Sports Therapy courses, so I completed a Sports Therapy Diploma to enable me to teach it. The college also put me through my Cert Ed so that I could have Qualified Teacher Status.

One of the instructors on my sports therapy course was an Osteopath and he was, by far, the best teacher and inspired me to do an Osteopathy degree. Before I started the Osteopathy degree (in the summer) I attended a series of biomechanics workshops with Martin Haines and he was to play a major role in my development in the late 00’s and going into the 10’s. I completed the degree whilst continuing to teach full time but in the 4th year of the degree I had to drop my work hours as the studying was getting too much. It was at that time that I was asked to become a programme director for Intelligent Training Systems (ITS). I helped convert the Biomechanics Diploma into a nationally recognised Level 4 course and we taught the programme all over the UK and even trained Personal Trainers and Athletic Trainers in the US (in Chicago - which is one of my favourite cities!). As part of the teaching team with ITS I regularly presented at FitPro and the International Fitness Showcase as well as touring the Esporta Health Club chain to train their fitness teams. I gave up my teaching role at the college to work with ITS as it was far more flexible, and I could work the job around my final couple of years on the Osteo degree. In the first year of Osteo we attended the cadaver labs at Keele University and I immediately knew it was something I wanted to do. So, (just because I wasn’t busy enough already!) I started a Post Grad in Clinical Anatomy in my 4th year of the Osteo degree. I managed to complete the Post Grad before I finished my Osteo Degree, so I came out of that period in the early 10’s as an Anatomist and an Osteopath.

When I completed the Sports Therapy diploma, I had started to hire rooms so that I could practice what I was teaching and as soon as I graduated as an Osteopath, I opened Movement Therapy Clinic in Birmingham. As with starting all new businesses, it was slow to get going. I needed to supplement my income, so I applied for a Sports Therapy Lecturer role at University College Birmingham (back to where I started!) I worked as a visiting lecturer initially and then got a permanent role and continued to build my practice around lecturing. I eventually got my own premises in 2014. 2014 was the teaching pinnacle of my career when I was asked to present 3 lectures at the IOC World Conference for Injury Prevention in Monaco (http://www.ioc-preventionconference.org/2014/index.html). I started to do more and more work with Martin Haines and have been working for him on projects with Boots, Startrite Shoes and Microscooter (https://www.micro-scooters.co.uk/playforlife) as part of the BryteSpark consultancy team. I also developed my L3 and L4 courses in Therapy into what the Movement Therapy Diploma is today. I identified a gap between traditional L3,4 and 5 courses and clinical qualifications and felt that given the right information those that did not want to go to University should have the opportunity to learn clinical reasoning skills so that they can understand the referral process in greater detail and make them safer practitioners. In the early 2010’s I taught for John Gibbons, IAM Tools, Oxford School of Sports Massage, Naqi and guest lectured at a number of universities throughout the UK and Europe. I was also now becoming established on the speaking network for therapy and was one of the main lecturers at the very first Therapy Expo when it was in Manchester. It was at the Manchester show where I first met Gary Benson and he was just starting the STA - I loved what he was trying to do and have been a part of it since. I am now part of the RockTape team and teach their courses as part of the Movement Therapy Diploma and for the RockTape training calendar. I now focus on treating patients 2 days a week (when we are in a normal situation!) and the rest of the time on the Diploma course. We now have two training schools in Liverpool and Leeds, and we are adding additional modules this year, so I have been busy writing and preparing those. As you can see, I started off in the industry as a part time lifeguard and working in a fish and chip shop and now run my own training school and clinic. It’s been hard work and I’ve doubted whether it has been worth it (many times!) but the people that I have met along the way have been one of the main reasons for carrying on. This is a people industry - if you love helping people then you are doing the right thing.