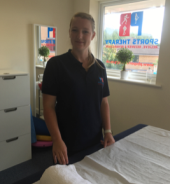 Lotti is a Graduate from the University of Hertfordshire with a BSc (Hons) Sports Therapy. She has also gained and expanded her knowledge with ongoing CPD, personal training qualifications and continuing to add coaching qualifications in hockey, rugby and swimming.

Since graduating Lotti has worked in a number of private sports injury clinics and with multiple sports teams including semi-professional football clubs and professional rugby clubs. In 2015, following a move to North Yorkshire, Lotti finally followed her dream and opened her own clinic 'Personal Best Sports Therapy' and is now growing a team of her own.

Lotti is passionate about all sports but biggest passion is with horse riding. She specialises in western riding, competing at a national level in her youth before taking a step back to concentrate on her studies when starting university. Since then she has kept riding but not competing..... That's the goal for 2017.